When Your Child Asks If Death Is Painful...

I don't even know how to answer some of his questions.

I knew they'd come one day.

They couldn't not--incorporating his brothers' short-lived lives into our every-day, regular lives as we do.

Of course he would get to an age where he'd ask questions that he really wanted answers to and I just didn't have.

Today, he asked  if it was painful for Matthew to die. Randomly, out of the blue, he asked.

People will tell you that circumcision 'doesn't hurt' and I think they're ridiculously ridiculous.
Science has proven time and time again that babies, even in utero at earlier-than-one-would-think gestations, react to pain.

So, did it hurt him when they stuck him repeatedly to get blood into him?
I don't know. Probably.

Did any of the several procedures they attempted hurt him?
I don't know. Probably.

Did it his head hurt because he'd lost so much blood and oxygen?
I don't know. Possibly.

Did it hurt him when they quickly moved and jerked his body around in attempts to save his life?
I don't know. Possibly. 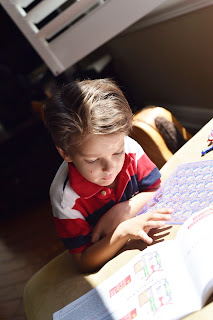 Luke asked if he knew he was dying.
I.don't.know.

I didn't know he was dying, so my fervent prayer is that he didn't either.
But I.don't.know.
And neither does anyone else.

So, when my child asked these questions? I answered the best I could.

I told him I didn't know, but didn't think so. I told him that I'm sure they gave him medicines for any pain they thought he might have had and that a lot of the time, Matthew was probably not even aware of what was happening.  I reminded him of last year when he had his oral surgery and how he didn't even know what happened and was fine after, which was a good frame of reference for Luke until he said, "But I didn't die."

I told him that I fully believe that God gave Matthew mercy and that he took away all the pain from Matthew.

Luke said, "I'm sure He did that because He loves babies."

And then we were both quiet.
He, because his questions had been sufficiently answered, and me?

Because what else is there to say?